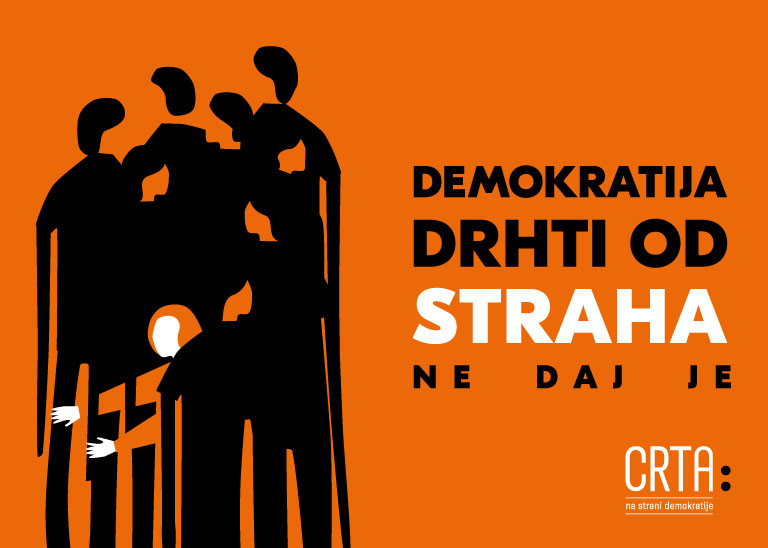 We are launching a media campaign “Standing by Democracy” aiming to encourage citizens to stand by the values of endangered democracy – to encourage them to truly act like citizens, with all the rights, freedoms and responsibility that being a citizen means.

Society is being overwhelmed with fear. We feel the existential fears, fears for our children’s future, for the prospects of our community, peace, safety…Usually, where’s growing fears, there’s democracy shrinking.

The researches we are conducting, as well as our encounters with the citizens all over Serbia, show us that majority is still opting for democracy. At the same time, the data tell us that people have less and less trust in the institutions which are supposed to be the pillars of democratic system. Mistrust gives birth to fear.

A growing number of citizens, when protected by anonymity, are claiming they have personally experienced some sort of political pressure. We can see what happens to the individuals who dare, in spite of all fears, to raise their voices and disclose those who behave like they are above the law.

Also, there are fewer media outlets we can trust and there is a growing fear of being exposed to unprofessional media bashing and shaming. Dialogue is pulling back from our society, and its place is being taken by the logics according to which everyone who disagrees is seen as an enemy. That logics unfortunately prevails on all sides of our political scene. In such circumstances people are escaping to self-isolation and apathy.

We are not calling citizens to vote one or another party. Neither we are calling them to boycott. What we ask them to do is much more demanding – we ask them to decide for themselves, listening the voice of their conscience. We ask them not to give up on non-violent struggle for a society ruled by law, where citizens freely decide on whom will be leading them. We want them to join us in rejecting to be driven by fears even though we know that our fears are not unjustified.

We are aware of the fact that we are addressing many of those who already have a long history of fighting for democracy. Many of them have been disappointed. We have the right to be disappointed and disillusioned. However, we are bound of acting rationally. And, it is only rational not to give up on what’s in the best interest of most of us.