This year’s research confirmed that we still do not have a satisfactory level of judicial openness. Courts and prosecutors’ offices in the region on average meet less than half of the openness indicators. It is not encouraging that this result is almost the same as last year. On the contrary, it indicates that the issue of openness is still not on the list of priorities of these institutions.

The transparency of judicial authorities in Serbia is at an unsatisfying level, despite the fact that research team has recorded slight progress in comparison to 2017. The results of the openness index in this field, increased from 30% to 33%.  The results of the research indicate a great heterogeneity between different courts’ practices when it comes to publishing the information 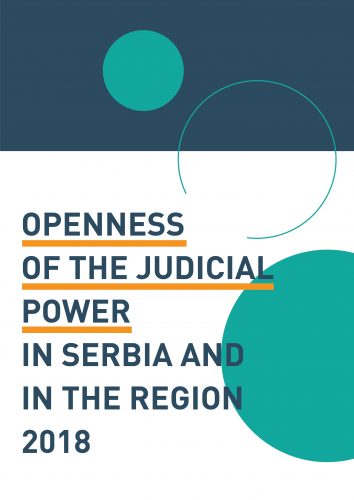 Parliamentary Insider for Autumn Sitting 2019
CRTA: Amendments to the Bill of the Law on Modifications and Supplement to the Anti-Corruption Agency Act
Roadmap on good governance
Openness of the Judiciary in Serbia and in the Region in 2018
Proposals for the application and/or amendment of the existing regulatory framework relating to media and elections
Rulebook on Obligations of Media Service Providers during Election Campaigns
Parliamentary Insider for Summer 2019
OUR INITIATIVES
SHOW MORE