During the first three months of the war in Ukraine, this topic was dominant in the media, while other topics were completely marginalised. Unlike the period before the start of the war when the media was sympathetic to Russia, after the start of the conflict that open support was softened. Nevertheless, according to media monitoring carried out by the CRTA in the period from February 24th to May 31st of this year, there are still far more positive reports about Russia than about the countries of the West.

Whenever media dealt with other topics, such as the issue of energy generating products, European integration, Kosovo independence, export and import… they would be discussed through the prism of events in Ukraine.

The analysis included 8,147 media articles – all of which were related to the war in Ukraine.

More mentions of Russia than of the USA, EU and NATO combined

The most represented foreign actor in the media in the context of the war in Ukraine was Russia. Russia was mentioned in media reports more times than the United States of America, the European Union and NATO combined. 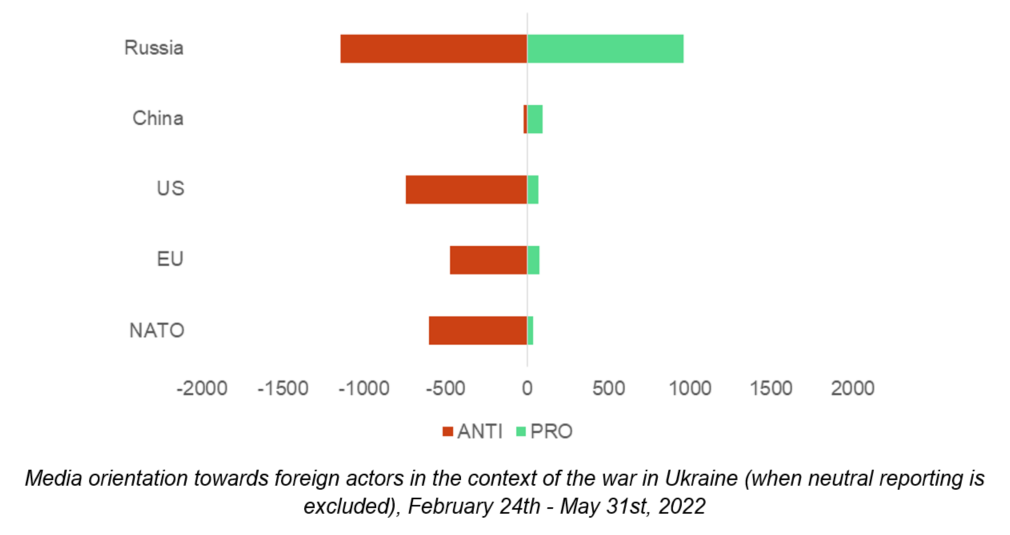 In comparison to the period before the war, when reports about Russia were dominantly positive, and those about the West mainly negative, one can see that this relation is changing to some extent. Open support for Russia in the media is now toned down, although still visible. Negative coverage of foreign actors, with the exception of China, is on the rise. However, there are still far more positive reports about Russia than about Western countries.

When it comes to mutual relationship between world powers, the dominant view is that Russia has been “ensnared” into the war. The war was interpreted as a defensive one, as the Russian struggle to suppress Western hegemony, distract NATO forces from Russia’s borders and fight against the Ukrainian regime, which was pushed into the war by the West.

In the context of relations with Serbia, at the beginning of the war, the dominant image was that Russia was an important protector and ally, a guarantor of the preservation of Kosovo and the independence of the Republika Srpska. During the war, that emphasis shifts to more tangible aspects of cooperation and the possibility of obtaining energy generating products, primarily gas.

Nonetheless, there were also brief moments of deviation from this rule. This happened when Russian President Vladimir Putin justified the secession of Donbass giving the example of Kosovo. At that moment, a negative campaign was running in the Serbian media, and Putin’s words were interpreted as “backstabbing Serbia”.

Televisions on the Russian side

During the first three months of the war in Ukraine, all television stations with national coverage reported in favour of Russia and negatively towards the West. The TVs Pink and Happy were particularly vocal in this regard. Biased reporting in favour of Russia was especially pronounced in the morning shows. 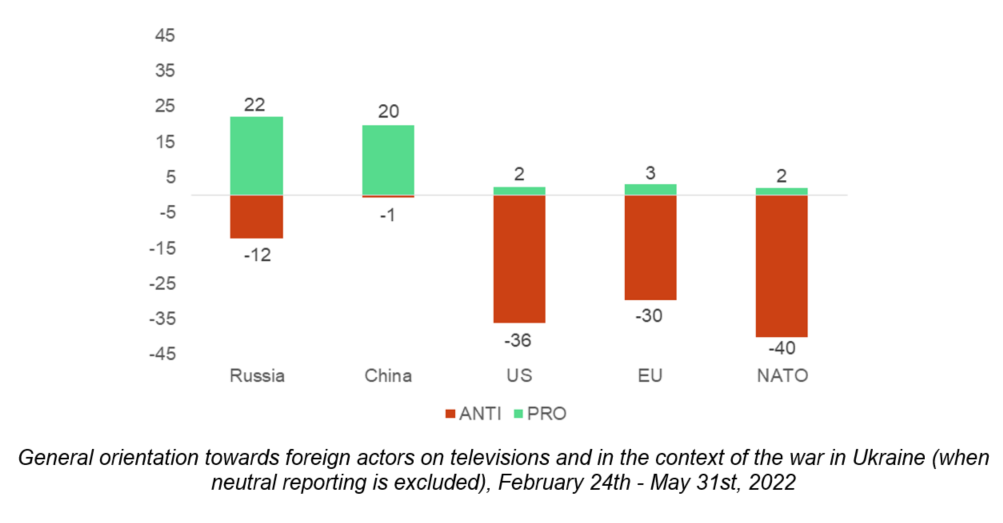 In daily newspapers, reporting in favour of the Russian side was expressed in the Informer and the Večernje novosti, while balanced reporting on foreign actors was delivered by the Blic and, partly, by the Kurir.

The analysis showed that the portals, with the exception of novosti.rs, which is pro-Russian, had had a more balanced approach to reporting on the Ukrainian crisis before the beginning, but also during the first three months of the war in Ukraine.

The portal’s more balanced approach can be interpreted as a consequence of their economic interests, the desire for hyperproduction of news that allows them greater visibility, and increased website traffic. That is why Internet portals transmit news published in both Western and Russian media.

You can read the full analysis here.