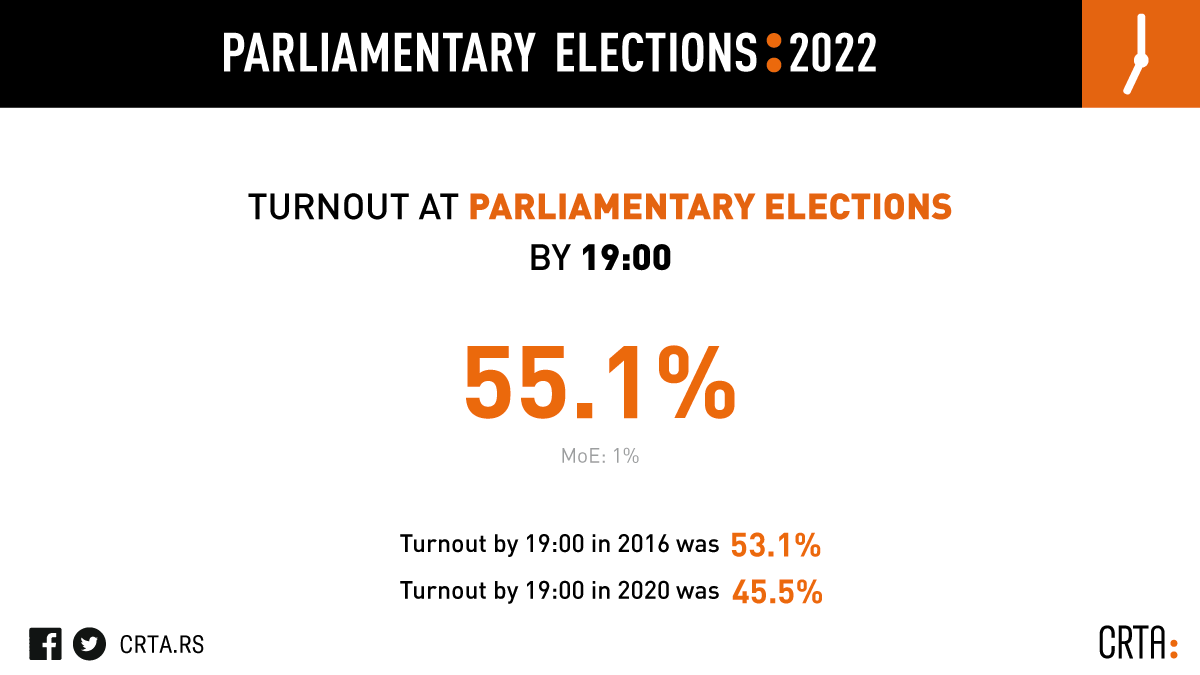 A total of 55,1 percent of citizens voted in the presidential elections by 19:00 (margin of error 1 percent).

On the territory of Belgrade, voter turnout by 19:00 in parliamentary elections is 52,2 (margin of error 0,6 percent), which is 4 percent points higher than in the 2018 Belgrade elections.

From the last reporting at 16:30 CRTA’s election observation mission submitted additional two complaints to the police on account of electoral corruption, totaling this number to seven complaints. Two complaints refer to cases of “carousel voting” that CRTA’s observers recorded in Kula and Surcin, and five other to cases of vote buying identified in Majdanpek, Zitoradja, Cukarica, Sabac and Beocin.

Voting of citizens from Kosovo and Metohija at 46 polling stations in Kursumlija, Tutin, Bujanovac and Raska was characterized by large crowds and poor organization of polls, which led to the endangerment of the secrecy of voting, considering the simultaneous presence of dozens of citizens at some polling stations. Intensified control from the side of the police was also identified in front of polling stations.

Considering the conduct of elections on multiple levels, it is expected that the vote count will last longer than in 2020. In order to ensure reliability and accuracy of data, CRTA will publically present preliminary results of elections when information from at least 95 percent of polling stations from its sample is collected and processed.

The next conference of the CRTA’s election observation mission will be held after at least 95 percent of polling stations from both samples (Serbia and Belgrade) are processed. The conference can be followed live at the CRTA’s Facebook page or YouTube channel.