Publications / 14.02.2022.
Share Tweet Post Email
Download PDF
The twelfth parliamentary legislature is characterised by high-intensity activities. 130 sitting days, 38 regular sittings (compared to 13 during 2016-2017) and 14 extraordinary (compared to 3 during 2016- 2017). Increased activity, however, does not mean more work on the quality of regulations. Parliamentary debates are used to deal with political dissidents. As many as 70 percent of the laws were adopted without amendments, and 40 percent of the committee sittings lasted less than 10 minutes. Most of them unconditionally adopted the draft regulations submitted by the Government. A large number of public hearings were organised. For the first time in December, we had a public hearing at which the planned national budget for next year was presented. Nevertheless, it was a hearing that only the chosen and the invited ones were allowed to attend. The efficiency of the work of this legislature is based on the fulfilment of a form that is devoid of essence. According to the MPs, a good part of the most important regulations were adopted just to “tick” some of the “boxes” with international obligations. The quality of these regulations and the reasons why it was necessary to adopt them had been relegated to the background. Read more details about what marked the regular autumn sitting of the Assembly of Serbia in this issue of Parliamentary Insider that brings assessments of the work of the Parliament from September to December 2021. 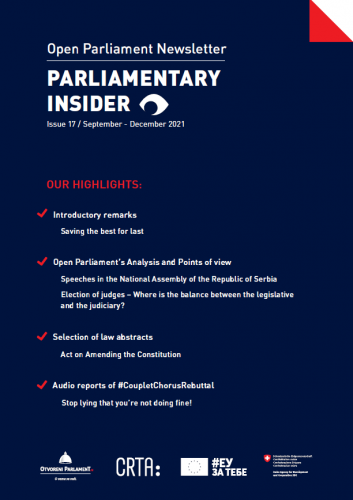