Audit of Political Engagement in Serbia – 2018.

In the framework of the Open Parliament initiative, The Centre for Research, Transparency and Accountability (CRTA)
conducted the sixth consecutive “Audit of political engagement in Serbia” with the support of Ipsos Strategic Marketing.
First two audits (from 2013 and 2014) were supported by the British Embassy in Belgrade and National Democratic
Institute. The aim of this audit was to determine the level of the Serbian citizens’ readiness to participate in democratic processes
that imply a series of different forms of citizen participation – from voting at the elections to initiating particular
campaigns; and monitoring the changes of the degree of participation in time. This audit represents a particular overview of the democratic situation in society. The extent to which the citizens are
ready to engage in social processes, to exercise their civil rights and to influence the decision makers is an indicator of
“the state of health” of a society. 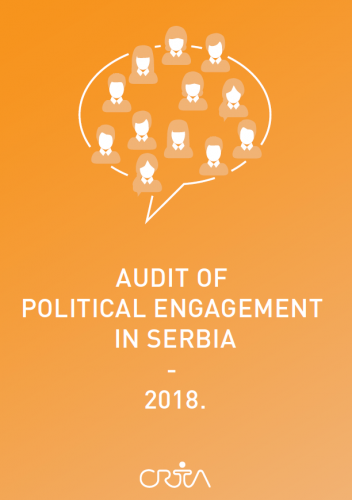